Greg Forster, with the Center for Transformational Churches at Trinity International University, opened the second day of the Oikonomia Network Faculty Retreat by greeting new schools that have joined Kern funded programs in a common goal of expanding curriculum development. In addition, he announced a “deep dive” seminar that will be lead by ON staff to empower schools to think beyond the self-evident coursework and find

deeper levels of exploring faith, work, and economics in theological education. The Oikonomia Network also explicitly partners with the Faith@Work and the Made to Flourish networks as well as other efforts to encourage a search for

economic wisdom and human flourishing. Such efforts include Tom Nelson’s new book The Economics of Neighborly Love as well as Brent Water’s new text Just Capitalism and his idea of “koinonia” as flourishing. In addition to small group studies and other academic resources, the Oikonomia Network continues to expand its offerings.

The morning continued with a presentation by Brian Fikkert. Dr. Brian Fikkert is the founder and executive director of the Chalmers Center for Economic Development, a research and training center that is dedicated to helping churches and missionaries to declare the kingdom of God by bringing economic development and spiritual transformation to the poor. Foster noted that most schools tend to assume that

Fikkert expressed concern around the “deforming” practices of certain models of capitalism in the world today, and the church’s inability to adequately prepare and spiritually form people in light of the culture’s understanding of the American dream. FIkkert noted that economic well being and happiness no longer intersect neatly in America. Instead,

the subjective sense happiness has declined. FIkkert noted suicide increased 134% between 1950 and 1999. Fikkert believes that the current form of global capitalism exported to the world remains flawed. While supporting capitalism, regulation, and market,

Fikkert argued capitalism tends to offer a truncated view of life and meaning. One of the main contributions the church has to offer in this space is to define what it means to be human, and that the church needs to be an incubator of true humanness in light of this view.

Thinking of our view of humanity, Fikkert noted, we tend to think of humans through the language of mind, affections, will, and body. However, we really need to also conceive of humanity through relational 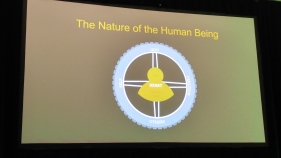 connections.  So, we need to understand humans much like an automobile tire, constantly revolving through our relationships with God, creation, others, and self. When one of those relationships appear broken (potholes in the road) through environmental influences, those deeply affect the nature of the person.

Fikkert argues for the process of individual and cultural formation that includes shaping narratives, individual character, formative practice, and institutions with their policies.

FIkkert argues for three basic understandings concerning humanity as image bearers (based on the imago Dei) that imply something about the image humans seek: 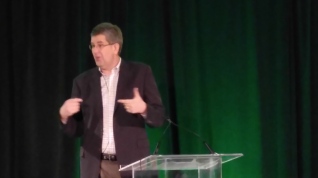 Fikkert then moved to explain how contemporary economics influence human image bearing. First, Brian noted that those who tend to work in Mainstream (Neo-classical) Economics find themselves shaped through its disciplinary perspectives. While claiming to be purely descriptive (but reductionistic in nature), basic courses in macroeconomics teach certain “self-evident” principles

The combination of efficient transactions that appeal to rational self-interest actually provide a normative, not descriptive view of the world. As a result of these perspectives, the god people worship in this form of capitalism is best described as Homo Economicus which proves incredibly deforming. The evidence of deformation includes the following:

Fikkert closed by appealing to the church to provide a richer theological anthropology, as well as focus on practices, that encourage and engender a different way of understanding and living an economic life. As the church does so, true human flourishing based on relationality and grace will provide an alternative view of economic life.

Andy Crouch joined Fikker on stage for a debrief. Crouch asked how the church can speak into this issue without an understanding economics? Fikkert responded that actually many studies in happiness and other efforts have caused economists to be open to additional insights beyond traditional neo-classical economic theories. Crouch offered we need to create new “metrics” in determining what is human flourishing. Fikkert noted that most economic measures focus on consumption where, from a trinitarian view of grace,

perhaps we should measure “giving” as an expression of flourishing. Crouch alluded to Jesus admonition to love God with heart soul mind strength where we are persons with these “complexes” for love. Crouch also noted how much of our work lives remain disembodied via laptop computers, while other people engage in mindless labor. Could there be a way of understanding work as “holistic” that embraces all four aspects?

Fikkert noted the dehumanization of the factory line, which creates this sense of separation not only in isolating people around one activity and also isolates people from each other. Fikkert noted the conditions in most workplaces today appear antithetical to holistic, relational, life. Fikkert’s view of the church providing a place where we can explore a better form of the human self. All the church needs to do is stay with the truth of the imago Dei and humanity. People “feel” something has gone wrong, so the church has an opportunity to provide an alternative view of life and flourishing.