The final Oikonomia Network (ON) session included some “in house” moves among the network including both a new initiative with local congregations as well as institutional relocation. The Oikonomia Network (ON) has moved to Trinity International University as part of the Center for Transformational Churches where Forster now resides. In addition, a new

initiative begins with the Made to Flourish network, a collaboration among congregations and seminaries to connect Sunday to Monday, focusing on faith and work, guided by Tom Nelson.

ON Director Greg Forster noted the move was motivated originally by Robert Kern’s desire to prepare pastors, and the need to foster an appreciation and preparation for work. Kern desired to connect work, theology, and the economy and sees theological education as the primary nexus of engagement. While the Kern foundation focused initially on grant making, the ON networks’ emphasis on

retreats, newsletters, and resources proved equally fruitful. Over time there was a need to move the research and resource elements of the ON network from a grant-making organization to an academic setting like TIU seemed quite necessary.

With Amy Sherman facilitating the conversation, participants learned Greg’s role has changed in that he is no longer involved in grant making though he

provides insight to the grant committee as needed. Instead, Greg has begun to increase resource development such as TED style presentations, and as well as also expanding his own research interests without having people conflate his argumentation with the foundation’s reputation.

Tom Nelson also described his new role as President of the Made to Flourish Network. The Kern Family Foundation sponsored network entails gathering pastors, and congregational leaders, around the United States. The architecture occurred over a year’s planning including development of an independent non-profit that supports a national platform from Kansas City. The goal was to maintain a broad, irenic, gathering among evangelicals.

The mission of Made to Flourish (MTF) to help pastors connect Sunday to Monday by forming a new generations of pastors to minister differently, while humbly “reforming” current pastoral practice for those already in ministry. The goals include bringing seminary and local church together, to both engage theology and reshape pastoral practice. Conversations includes both laity as well as pastors.

One of the core values entails maintaining an integral relationship between “being” and “doing,” piety and effective pastoral practice. 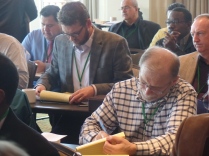 Nelson stressed MTF believes strongly in theologically reflective engagement. Nelson noted most pastors read other practitioners almost exclusively. Nelson, however, wants pastors to be able to access abstract scholarship in a meaningful way. In addition, if we will have teaching “hospitals” or experientially focused ministry education, it will also require partnerships with seminaries in a meaningful way.

Forster, noted that the Oikonomia Network always valued the pastor. The end goal for ON remains pastors equipping congregants. Forster noted the shift from giving grants to seminaries to providing grants to congregations. For example, the need for vocational education among youth and families

emerged from the local context, not the seminary. Forster noted that the dynamic of congregations/pastors informing academy, and academy resourcing congregations, reflects as a horizontal relationship… recognizing that both contexts bring knowledge. The question “who has knowledge” proves incredibly important since the interaction creates knowledge by validating both perspectives.

Forster also noted that, in a time of unprecedented change, pastors will need to adapt their approach in light of religious pluralism and a fragmentation of systems of meaning. This change will come for both congregation and seminary. The challenge remains our being both faithful and adaptive in light of the ongoing change.